This post is a recipe for making a neural network which is able to recognize hand written numeric digits (0-9) with 95% accuracy.

The intent is that you can use this recipe (and included simple C++ code, and interactive web demo!) as a starting point for some hands on experimentation.

A recent post of mine talks about all the things used in this recipe so give it a read if you want more info about anything: How to Train Neural Networks With Backpropagation.

This recipe is also taken straight from this amazing website (but coded from scratch in C++ by myself), where it’s implemented in python: Using neural nets to recognize handwritten digits.

The neural network takes as input 28×28 greyscale images, so there will be 784 input neurons.

There is one hidden layer that has 30 neurons.

The final layer is the output layer which has 10 neurons.

The neurons use the sigmoid activation function, and the cost function used is half mean squared error.

Training uses a learning rate of 3.0 and the training data is processed by the network 30 times (aka 30 training epochs), using a minibatch size of 10.

A minibatch size of 10 just means that we calculate the gradient for 10 training samples at a time and adjust the weights and biases using that gradient. We do that for the entire (shuffled) 60,000 training items and call that a single epoch. 30 epochs mean we do this full process 30 times.

There are 60,000 items in the training data, mapping 28×28 greyscale images to what digit 0-9 they actually represent.

The test and training data is the MNIST data set. I have a link to zip file I made with the data in it below, but this is where I got the data from: The MNIST database of handwritten digits.

That is the entire recipe!

The 30 training epochs took 1 minute 22 seconds on my machine in release x64 (with REPORT_ERROR_WHILE_TRAINING() set to 0 to speed things up), but the code could be made to run faster by using SIMD, putting it on the GPU, getting multithreading involved or other things.

Below is a graph of the accuracy during the training epochs.

Notice that most learning happened very early on and then only slowly improved from there. This is due to our neuron activation functions and also our cost function. There are better choices for both, but this is also an ongoing area of research to improve in neural networks.

The end result of my training run is 95.32% accuracy but you may get slightly higher or lower due to random initialization of weights and biases. That sounds pretty high, but if you were actually using this, 4 or 5 numbers wrong out of 100 is a pretty big deal! The record for MNIST is 99.77% accuracy using “a committee of convolutional networks” where they distorted the input data during training to make it learn in a more generalized way (described as “committee of 35 conv. net, 1-20-P-40-P-150-10 [elastic distortions]”).

A better cost function would probably be the cross entropy cost function, a better activation function than sigmoid would probably be an ELU (Exponential Linear Unit). A soft max layer could be used instead of just taking the maximum output neuron as the answer. The weights could be initialized to smarter values. We could also use a convolutional layer to help let the network learn features in a way that didn’t also tie the features to specific locations in the images.

Many of these things are described in good detail at http://neuralnetworksanddeeplearning.com/, particularly in chapter 3 where they make a python implementation of a convolutional neural network which performs better than this one. I highly recommend checking that website out!

You can play with a network created with this recipe here: Recognize Handwritten Digit 95% Accuracy

Here is an example of it correctly detecting that I drew a 4. 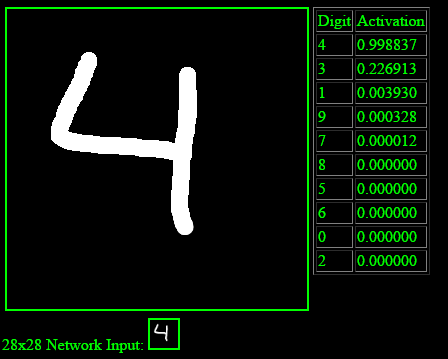 The demo works “pretty well” but it does have a little less than 95% accuracy.

The reason for this though is that it isn’t comparing apples to apples.

A handwritten digit isn’t quite the same as a digit drawn with a mouse. Check out the image below to see 100 of the training images and see what i mean. 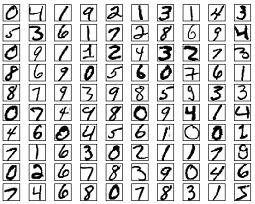 The demo finds the bounding box of the drawn image and rescales that bounding box to a 20×20 image, preserving the aspect ratio. It then puts that into a 28×28 image, using the center of mass of the pixels to center the smaller image in the larger one. This is how the MNIST data was generated, so makes the demo more accurate, but it also has the nice side effect of making it so you can draw a number of any size, in any part of the box, and it will treat it the same as if you drew it at a difference size, or in a different part of the box.

The code that goes with this post outputs the weights, biases and network structure in a json format that is very easy to drop into the html5 demo. This way, if you want to try different things in the network, it should be fairly low effort to adjust the demo to try your adjustments there as well.

Lastly, it might be interesting to get the derivatives of the inputs and play around with the input you gave it. Some experiments I can think of:

The source code and mnist data is on github at MNIST1, but is also included below for your convenience.

If grabbing the source code from below instead of github, you will need to extract this zip file into the working directory of the program as well. It contains the test data used for training the network.
mnist.zip

Note: it’s been reported on that some compilers/OSs, std::random_device will use dev/urandom which can result in lower quality random numbers, which can result in the network not learning as quickly or to as high of accuracy. You can force it to use dev/random instead which will fix that problem. Details can be found here: http://en.cppreference.com/w/cpp/numeric/random/random_device/random_device

Thanks for reading, and if you have any questions, comments, or just want to chat, hit me up in the comments below, or on twitter at @Atrix256.

This entry was posted in C++, Neural Networks. Bookmark the permalink.