Let’s say that you’ve allocated an array of 20 integers and have used them all. Now it’s time to allocate more, but you aren’t quite sure how many integers you will need in the end. What do you do?

Realloc is probably what you think of first for solving this problem, but let’s ignore that option for the moment. (If you haven’t used realloc before, give this a read! Alloca and Realloc – Useful Tools, Not Ancient Relics)

The question remains though, how much memory should you allocate for this new, larger buffer?

You could double your current buffer size whenever you ran out of space. This would mean that as the buffer grew over time, you would do fewer allocations but would have more wasted (allocated but unused) memory.

You could also go the other way and just add 10 more int’s every time you ran out of space. This would mean that you would do a larger number of allocations (more CPU usage, possibly more fragmentation), but you’d end up with less wasted space.

Either way, it obviously depends entirely on usage patterns and it’s all subjective and situational.

A Surprising Reason For Caring

Believe it or not, growth strategies can make a huge difference. Below we will explore the difference between the seemingly arbitrary rules of making a buffer twice as big, or 1.5 times as big.

Let’s say that we have a bunch of free memory starting at address 0. Let’s analyze what happens as we resize arrays in each scenario.

First let’s see what happens when we double a buffer’s size when it gets full. 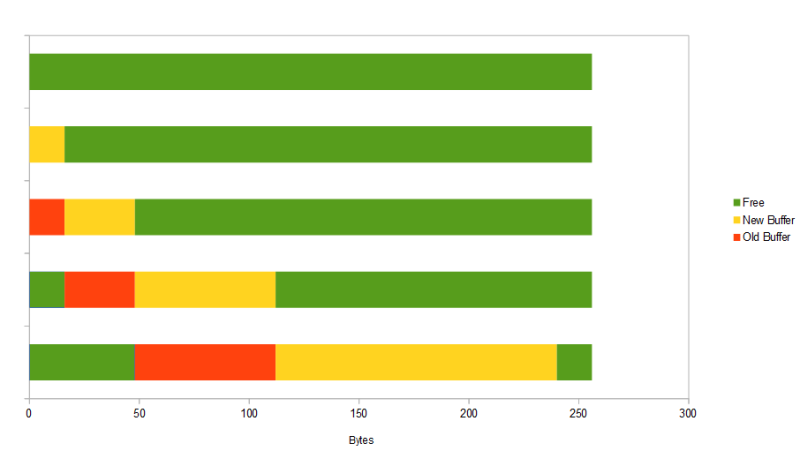 We start by allocating 16 bytes. The allocator gives us address 0 for our pointer.

When the buffer gets full, we allocate 32 bytes (at address 16), copy the 16 bytes into it and then free our first 16 byte buffer.

When that buffer gets full, we allocate 64 bytes (at address 48), copy the 32 bytes into it and then free our 32 byte buffer.

As you can see, doubling the buffer size causes our pointer to keep moving further down in address space, and a free piece of memory before it will never be large enough to hold a future allocation.

Let’s see what happens when we make a buffer 1.5x as large when it gets full. 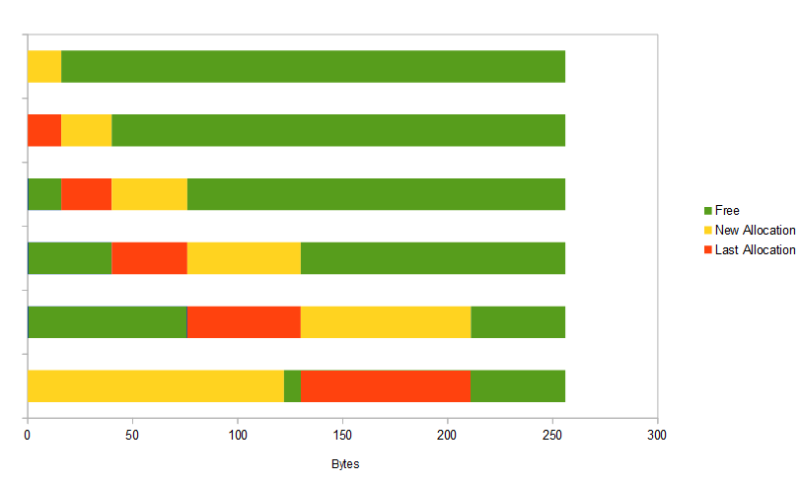 We start by allocating 16 bytes. The allocator gives us address 0 for our pointer.

When the buffer gets full, we allocate 24 bytes (at address 16), copy the 16 bytes into it and then free our first 16 byte buffer.

When that buffer gets full, we allocate 36 bytes (at address 40), copy the 24 bytes into it and free the 24 byte buffer.

When that buffer gets full, we allocate 54 bytes (at address 76), copy the 36 bytes into it and free the 36 byte buffer.

Lastly, when that buffer gets full, we need to allocate 122 bytes (we rounded it up). In this case, there is 130 bytes of unused memory starting at address 0, so we can just allocate 122 of those bytes, copy our 81 bytes into it and free the 81 byte buffer.

Our allocations have folded back into themselves. Our pattern of resizing hasn’t created an ever moving / ever growing memory fragmentation monster, unlike the buffer size doubling, which has!

The above does decrease memory fragmentation, by encouraging an allocation to tend to stay in one spot in memory, but it comes at a cost. That cost is that since it’s allocating less extra memory when it runs out, that you will end up having to do more allocations to reach the same level of memory usage.

That might be a benefit though, depending on your specific needs. Another way of looking at that is that you will end up with fewer bytes of wasted memory. By wasted memory I mean allocated bytes which are not actually used to store anything.

You may be thinking “well if I use realloc, I don’t need to care about this right?”

That isn’t exactly true. If realloc is unable to give you more memory at the current pointer location, it will allocate a new buffer, copy the old data to the new buffer, free the old buffer, and return you the pointer to the new buffer. This is exactly the case that happens when you don’t use realloc.

Using the above growth strategy with realloc makes realloc work even better. It’s a good thing!

Caveat: exotic allocator behavior may not actually benefit from using this strategy with realloc, so have a look for yourself if you are in doubt!

Here’s a discussion on the topic:
What is the ideal growth rate for a dynamically allocated array?

From the link above, apparently the ideal factor to use when upsizing a buffer in general (when worrying about fragmentation like this), is the golden ratio 1.618. Weird, huh?

Have other information about why various growth factors matter? Leave a comment or drop me a line (:

Thanks to Tom for mentioning this concept. Pretty interesting and surprising IMO.