Let’s say you are trying to find the distance between two points in 2D, but that these points are in a universe that “wraps around” like old video games – leaving the screen on the right, left, top or bottom side makes you re-appear on the opposite edge.

This universe is actually shaped like a toroid, also known as a doughnut. It’s actually an impossible object, a “flat torus”, so not exactly a doughnut, but whatever.

How would you calculate the distance between two points in a universe like this?

Let’s imagine the situation below where we are trying to find the distance between the red point and the green point:

One way to do this would be to pick one of the points (I’m picking red in this case) and clone it 8 times to surround the cell like the below. You’d calculate the distance from the green point to each of the 9 red points, and whatever distance was smallest would be the answer. 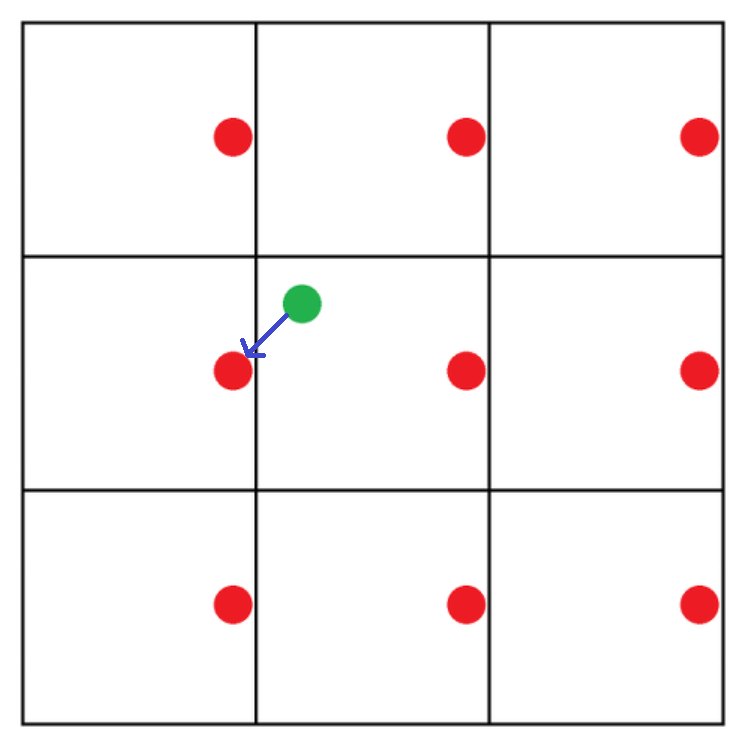 Luckily there’s a better way to approach this.

Looking at the distance formula we can see that if we minimize each axis individually, that we will also end up with the minimal distance overall.

So, the better way is to minimize each axis individually.

On the x axis you’d find if the x axis distance between the red and green point is minimal when you subtract 1 from the red dot’s x axis position, leave it alone, or add 1.

Whichever x axis value of the red dot gives you the minimal x axis 1D distance is the x axis location to use.

This gives you the closest point which you can then plug into the distance formula to get the distance between the points in this wrap around space.

You can actually do better though.

Still working on each axis individually, you can calculate the absoluate value of the 1D distance between the two points on that axis. If that distance is greater than 0.5, the real distance for that axis is 1-distance.

The intuition here is that if you are in a 1d repeating space, if going from A to B is more than half the distance, it means that you went the wrong way, and that going the other way is shorter. The distance of that other way is one minus whatever distance you just calculated since the distance from one point to itself is 1!

Do that for each axis and use those 1d distances in the distance formula to get the actual distance.

This lets you minimize the distance without having to explicitly figure out which combination makes the point closest.

More importantly, it lets you efficiently calculate the distance between the two points in toroidal space (doughnut space!)

The computational complexity is a lot better. It’s now linear in the number of dimensions:

I hit this problem trying to make a tileable texture. I needed to place a few circles on a texture such that the circles weren’t too close to each other, even when the texture was tiled.

That let me make an image that kept the distance constraints even when it was tiled.

Here’s an example image by itself:

Here is the image tiled: 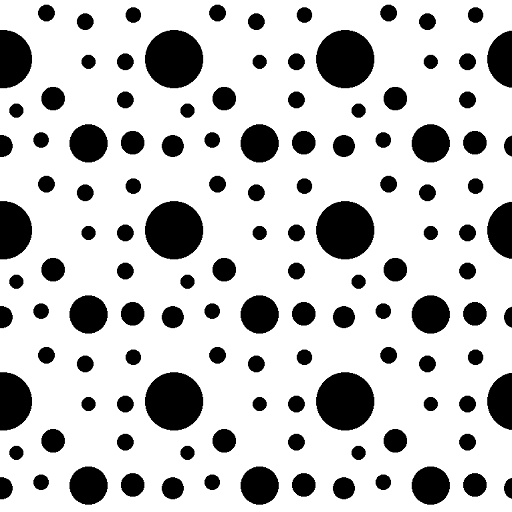 This entry was posted in Game Development, Graphics, Math, Uncategorized. Bookmark the permalink.