Here are the last two SSAA algorithms/sampling patterns that I wanted to share – FlipQuad and FlipTri.

The last post talked about 4-Rook antialiasing which took 4 samples per pixel to do antialiasing.

If you combine the ideas from the last two posts, you could start with the 4-rook sampling points and push them to the edge of the pixel so that the edge samples can be shared between the pixels that share the edge.

If you do that though, you’ll actually have two samples on each edge. To solve this and keep the same number of sample points per pixel, you could flip every other pixel’s sample points.

Ta-Da! That is exactly what FlipQuad is. Check out the sampling pattern below, which shows the samples for a 2×2 grid of pixels. You’d just repeat this pattern for as many pixels as you had. 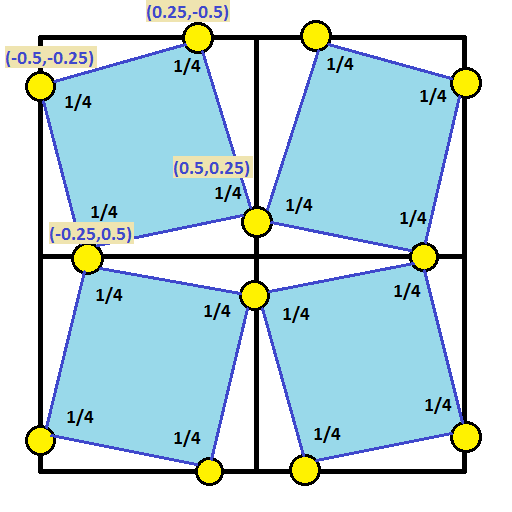 Here’s an image that shows FlipQuad in action – anti aliased on the left, regular image on the right. You can click on the image to see the shadertoy demo of it. 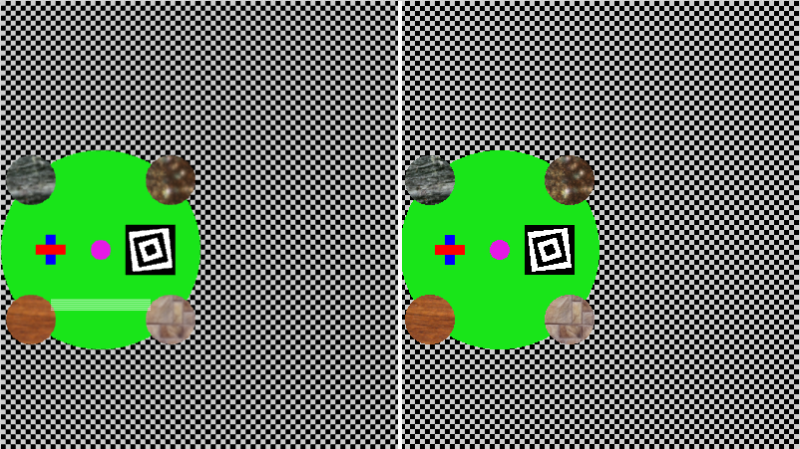 It works pretty well, but it is pretty blurry, especially the textures! Kind of makes sense because quincunx was blurry due to shared samples. We have ONLY shared samples in this pattern, so it’s understandable that it’s kind of blurry. There’s less unique information per pixel than in the other SSAA techniques shown so far.

This essentially is 2 samples rendered per pixel to get 4x SSAA.

Flipquad worked decently, but instead of using a quad, could we use a triangle? Yes we can, check out the 2×2 pixel sampling pattern below: 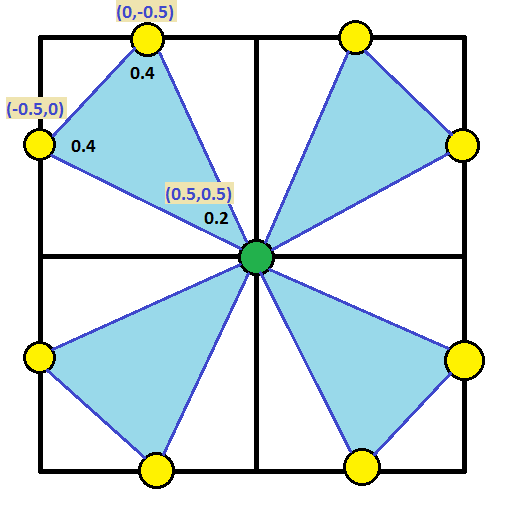 Here’s an image that shows FlipTri in action – anti aliased on the left, regular image on the right. You can click on the image to see the shadertoy demo of it.

This essentially is 1.25 samples rendered per pixel to get 3x SSAA! It really doesn’t look that different to my eyes than the flipquad method, but it uses quite a fewer number of samples!

So basically, there’s a bunch of different ways to do SSAA style anti aliasing, even beyond the ones I showed, but in the end you are basically just taking more samples and/or sharing samples across multiple pixels to get a better resulting image.

At SIGGRAPH 2014, someone mentioned in the “advancements in realtime rendering” talk that they used the flipquad pattern along with temporal supersampling. That made it so the 2 samples rendered per pixel was amortized across two frames and thus became one sample per pixel, which is pretty nifty. I feel like you could extend that to flip tri’s and perhaps render less than 1 sample per pixel each frame.

A big issue with implementing these in modern graphics situations is that it’s difficult to render a sample once and share it across multiple pixels. I have a way in mind involving rendering the scene a couple times with different sized buffers and offsets, but not sure yet if it’s practical. Temporal supersampling algorithms definitely seem like they could benefit from these exotic patterns more easily.

Up next I think I’m going to try and figure out MSAA, which has similar results as SSAA, but from the sound of things, performs a bit better.

A Weighted Error Metric and Optimization Method for
Antialiasing Patterns

A Family of Inexpensive Sampling Schemes

This entry was posted in Game Development, Graphics. Bookmark the permalink.