In this post I’m going to show how you turn a truth table into a digital logic circuit that uses XOR and AND gates.

My specific usage case for this is in my investigations into homomorphic encryption, which as you may recall is able to perform computation on encrypted data. This lets encrypted data be operated on by an untrusted source, given back to you, and then you can decrypt your data to get a result.

Lots of use cases if this can ever get fast enough to become practical, such as doing cloud computing with private data. However, when doing homomorphic encryption (at least currently, for the techniques I’m using), you only have XOR and AND logic operations.

So, I’m using the information in this post to be able to turn a lookup table, or a specific boolean function, into a logic circuit that I can feed into a homomorphic encryption based digital circuit.

Essentially I want to figure out how to do a homomorphic table lookup to try and make some simple as possible circuits, that will in turn be as fast and lean as possible.

Algebraic normal form (ANF) is a way of writing a boolean function using only XOR and AND.

There are other forms for writing boolean logic, but ANF suits me best for my homomorphic encryption circuit needs!

An example of boolean logic in ANF is the below:

It is essentially a boolean polynomial, where AND is like multiplication, and XOR is like addition. It even factors the same way. In fact, ANF is not always the smallest circuit possible, you’d have to factor common ANDs to find the smallest way you could represent the circuit, like the below:

That smaller form does 1 AND and 2 XORs, versus the ANF which does 3 ANDs and 2 XORs. In homomorphic encryption, since AND is so much more costly than XOR, minimizing the ANDs is a very nice win, and worth the effort. 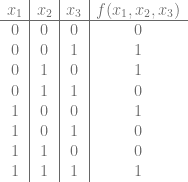 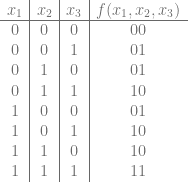 When I first saw the explanation for converting a truth table to ANF, it looked pretty complicated, but luckily it turns out to be pretty easy.

The basic idea is that you make a term for each possible combination of x inputs, ANDing a term by each constant, and then solving for those constants.

Let’s use the truth table from the last section:

For three inputs, the starting equation looks like this:

Now we have to solve for the a values.

, we just look in the truth table for function

to see if we have an odd or even number of ones in the output of the function. If there is an even number, it is 0, else it is a 1.

Since we have an even number of ones, the value is 0, so our equation becomes this:

is the symbol for AND. I’m showing it explicitly because otherwise the equation looks weird, and a multiplication symbol isn’t correct.

Since 0 ANDed with anything else is 0, and also since n XOR 0 = n, that whole last term disappears, leaving us with this equation:

Next up, to solve for

, we need to limit our truth table to

. That truth table is below, made from the original truth table, but throwing out any row where

We again just look at whether there are an odd or even number of ones in the function output, and use that to set

appropriately. In this case, there are an even number, so we set it to 0, which makes that term disappear again. Our function is now down to this:

If we look at

, we find that it also has an even number of ones, making

become 0 and making that term disappear.

, it also has an even number of ones, making

become 0 and making that term disappear as well.

That leaves us with this equation:

, we look at the truth table for

There are an odd number of ones in the output, so

becomes 1. Finally, we get to keep a term! The equation is below:

If you do the same process for

, you’ll find that they also have odd numbers of ones in the output so also become ones. That puts our equation at:

, is just looking at whether there are an odd or even number of ones in the function

which you can look up directly in the lookup table. It’s even, so

becomes 0, which makes our full final equation into this:

We are done! This truth table can be implemented with 3 XORs and 0 ANDs. A pretty efficient operation!

You can see this is true if you work it out with the truth table. Try it out and see!

Here is some sample code that lets you define a lookup table by implementing an integer function, and it generates the ANF for each output bit for the truth table. It also verifies that the ANF gives the correct answer. It shows you how to use this to make various circuits: bit count, addition, multiplication, division and modulus.

Here is the program output for a “bit count” circuit. It counts the number of bits that are 1, in the 3 bit input, and outputs the answer as 2 bit output. Note that the bit 0 output is the same functionality as the example we worked through by hand, and you can see that it comes up with the same answer.

Here is the program output for an adder circuit. It adds two 2 bit numbers, and outputs a 3 bit output.

Here is the program output for a multiplication circuit. It multiplies two 2 bit numbers, and outputs a 4 bit number.

While the above shows you how to turn a single bit truth table into ANF, extending this to a multi bit lookup table is super simple; you just do the same process for each output bit in the lookup table.

Here are a few links in case anything above is unclear, or you want more information.

This entry was posted in C++, Computer Science, Encryption + Security. Bookmark the permalink.