This post is on something called Shamir’s Secret Sharing. It’s a technique where you can break a secret number up into

different pieces, where if you have any

pieces, you are able to figure out the secret.

Thinking of it in video game terms, imagine there are 10 keys hidden in a level, but you can escape the level whenever you find any 7 of them. This is what Shamir’s Secret Sharing enables you to set up cryptographically.

Interestingly in this case, the term sharing in “secret sharing” doesn’t mean sharing the secret with others. It means breaking the secret up into pieces, or SHARES. Secret sharing means that you make shares out of a secret, such that if you have enough of the shares, you can recover the secret.

The basic idea of how it works is actually really simple. This is good for us trying to learn the technique, but also good to show it’s security since there are so few moving parts.

It relies on something called the Unisolvence Theorem which is a fancy label meaning these things:

At a high level, how this technique works is that the number of shares (keys) you want someone to collect (

) defines the degree of an equation.

You use random numbers as the coefficients of the powers of

in that equation, but use your secret number as the constant term.

data points of the form

. Those are your shares. You then give individual shares to people, or go hide them in your dungeon or do whatever you are going to do with them.

As soon as any one person has

shares (data points), they will be able to figure out the equation of the curve and thus get the secret.

The secret number is the constant term of the polynomial, which is also just

This image below from wikipedia is great for seeing how you may have two points of a cubic curve, but without a third point you can’t be sure what the quadratic equation is. In fact, there are an infinite number of quadratic curves that pass through any two points! Because of that, it takes the full number of required shares for you to be able to unlock the secret. 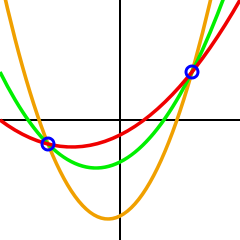 First you decide how many shares you want it to take to unlock the secret. This determines the degree of your equation.

Let’s say you wanted a person to have to have four shares to unlock the secret. This means our equation will be a cubic equation, since it takes four points to uniquely define a cubic equation.

values are random numbers, and

is the secret value.

Let’s say that our secret value is 435, and that we picked some random numbers for the equation, making the below:

We now have a function that is uniquely identifiable by any 4 points of data on it’s curve.

Next we decide how many pieces we are going to create total. We need at least 4 so that it is in fact solvable. Let’s make 6 shares.

To do this, you just plug in 6 different values of x and pair each x value with it’s y value. Let’s do that:

When doing this part, remember that the secret number is

, so make sure and not share what the value of the function is when x is 0!

You could then distribute the shares (data pairs) as you saw fit. Maybe some people are more important, so you give them more than one share, requiring a smaller amount of cooperation with them to unlock the secret.

Share distribution details are totally up to you, but we now have our shares, whereby if you have any of the 4 of the 6 total shares, you can unlock the secret.

How Do You Join The Secret?

Once you have the right number of shares and you know the degree of the polynomial (pre-shared “public” information), unlocking the secret is a pretty straightforward process too. To unlock the secret, you just need to use ANY method available for creating an equation of the correct degree from a set of data points.

This can be one of several different interpolation techniques, but the most common one to use seems to be Lagrange interpolation, which is something I previously wrote up that you can read about here: Lagrange Interpolation.

Once you have the equation, you can either evaluate

, or you can write the equation in polynomial form and the constant term will be the secret value.

Let’s say that we have these four shares and are ready to get the cubic function and then unlock the secret number:

We could bust out some Lagrange interpolation and figure this out, but let’s be lazy… err efficient I mean. Wolfram alpha can do this for us!

That gives us this equation, saying that it is a perfect fit (which it is!)

You can see that our constant term (and

Daaaayummm Bru… that is lit AF! We just got hacked by wolfram alpha 😛

Unfortunately, the above has a weakness. The weakness is that each share you get gives you a little bit more information about the secret value. You can read more about this in the links section at the end if you want to know more details.

Ideally, you wouldn’t have any information about the secret value until you had the full number of shares required to unlock the secret.

To address this problem, we are going to choose some prime number

and instead of shares being

data points on the curve, they are going to be

. In technical terms we are going to be using points on a finite field, or a Galois field.

The value we choose for

needs to be larger than any of the coefficients of our terms (the random numbers) as well as larger than our secret value and larger than the number of shares we want to create. The larger the better besides that, because a larger

If you want to use this technique in a situation which has real needs for security, please make sure and read more on this technique from more authoritative sources. I’m glossing over the details of security quite a bit, and just trying to give an intuitive understanding of this technique (:

Below is some sample source code that implements Shamir’s Secret Sharing in C++.

I use 64 bit integers, but if you were going to be using this in a realistic situation you could very well overflow 64 bit ints and get the wrong answers. I hit this problem for instance when trying to require more than about 10 shares, using a prime of 257, and generating 50 shares. If you hit the limit of 64 bit ints you can use a multi precision math library instead to have virtually unlimited sized ints. The boost multiprecision header library is a decent choice for multi precision integers, specifically cpp_int.

Here is some example output of the program:

Now that you understand this, you are probably ready to start reading up on elliptic curve cryptography. Give this link below a read if you are interested in a gentle introduction on that!
A (Relatively Easy To Understand) Primer on Elliptic Curve Cryptography